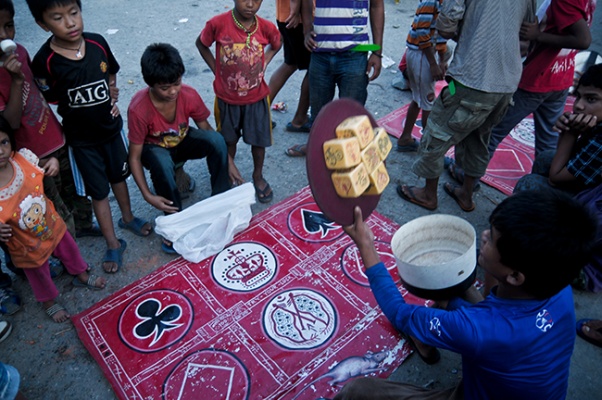 Langur Burja, a dice game popular in Nepal and in the British navy (where it is known as Crown and Anchor), uses six identical dice, each with six different symbols on it. After bets are placed, the banker tosses all six dice at once. The betting rules and payouts to the players may be found on the Internet. Variations of the game are played in France, Vietnam, China, Belgium, and Bermuda. They are not described here.

Overall, the Langur Burja banker (commonly know as “The House”) who tosses the dice has a big edge — eight percent — over the players, but that is not the focus here. The purpose here is to show how to calculate the probability of each possible outcome of one toss of six dice. Any six symbols, pictures, colors, or numbers will do. In England, for example, the six symbols are a heart, a spade, a diamond, a club, a crown, and an anchor. Herein they are simply called colors, as any six colors on each die will do.

END_OF_DOCUMENT_TOKEN_TO_BE_REPLACED

Many people struggle to get CORS (Cross-Origin Resource Sharing) enabled on their site to allow transmission of JSON, XML, or some other sort of data from one script to another, running on different domains. Simply adding Header always set Access-Control-Allow-Origin “*”  to .htaccess doesn’t do the trick for me.

Here’s what worked for me on Apache version 2.4.33… END_OF_DOCUMENT_TOKEN_TO_BE_REPLACED