how it works: turbochargers 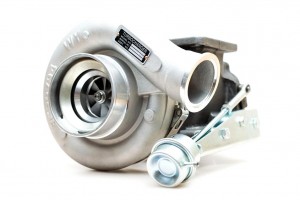 A turbocharger. It weighs about 10 pounds and is about the size of a cantaloupe.

I’m going to begin a series of explanatory pieces on how stuff works. This one is about turbocharged engines. I’m sure there are many tutorials on the internet, but this one aims to be as simple as possible, aimed at everyday non-technical audiences with plain language as briefly as possible.

What does “turbo” and “turbocharged” mean? What’s a turbocharger and why are they so awesome?

A turbocharger is a contraption that helps an engine produce more energy. In an automotive engine, that means the car will be able to accelerate faster when its engine is equipped with a turbocharger.

Here’s the deal. Every combustion engine that runs on a fuel also consumes air from the outside environment.1 A small amount of fuel is sprayed into a larger amount of air and then the mixture is ignited. Imagine spraying gasoline from a Windex bottle at a lit candle. Boom! Release of energy. 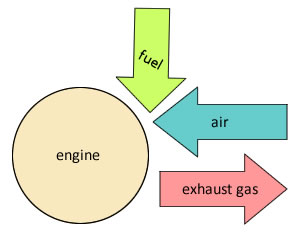 Air flow in a non-turbocharged (naturally-aspirated) engine. Air and fuel go in, exhaust comes out.

The engine converts this combustion to motion. However, not all the energy harnessed from combustion can be used to propel a vehicle.2 An engine has to spend some of its energy to continuously pump in fresh air and pump out exhaust gas after the mixture has burned. A turbocharger relieves the engine of some of the air-pumping work and presses in more air than the engine could on its own. 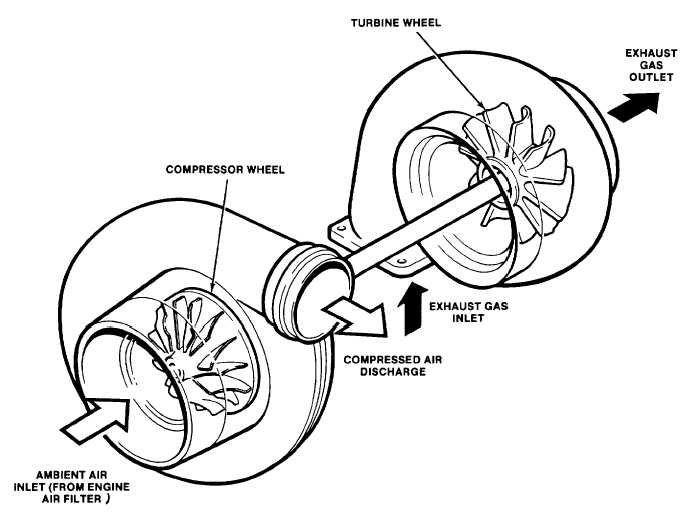 A turbocharger assembly split into two parts. Click to enlarge.

A turbocharger is composed of two major parts: the turbine and the compressor. Both sides have a miniature steel pinwheel inside, connected by a shaft. The turbine side is connected to the engine’s exhaust stream so that the flow of exhaust gas spins the turbine wheel, just like blowing on a pinwheel. This motion drives the other part of the turbine, the compressor. The compressor is just what it sounds like: an air compressor. It moves air. This air is drawn from the environment, compressed, then piped into the engine intake where it’s mixed with fuel and burned.

Air flow in a turbocharged engine

Turbocharged engine airflow paths. The turbocharger assembly is in yellow.

With more air reaching the engine and the engine relieved of some of the pumping work, more fuel can be added (to maintain the proper air:fuel mixture ratio), and more power is produced. Another reason a turbocharger adds power to an engine is that it can pack air into the engine at a higher pressure than the outside atmosphere provides. Having more air than an engine could naturally ingest allows a small engine to consume as much air as a bigger one.

From where comes this “free” energy? Doesn’t putting a turbine in the exhaust pipe increase the work the engine has to do to pump air out through it?

The key principle is that the waste gasses coming out of the engine are moving quickly, are very hot, dense, and are thus anxious to expand. The turbocharging model recovers this would-be wasted energy and uses it to compress the engine’s intake air. For this reason, turbochargers are installed as close to the engine as possible so that a minimum of heat and speed are lost. Turbochargers absorb so much of the energy emitted by an engine’s exhaust that the vehicle requires fewer mufflers than usual, in some cases none at all!3 So, yes, it’s a bit harder for the engine to push exhaust gas through the turbine, but the benefit of introducing the resulting compressed air to the engine more than compensates. 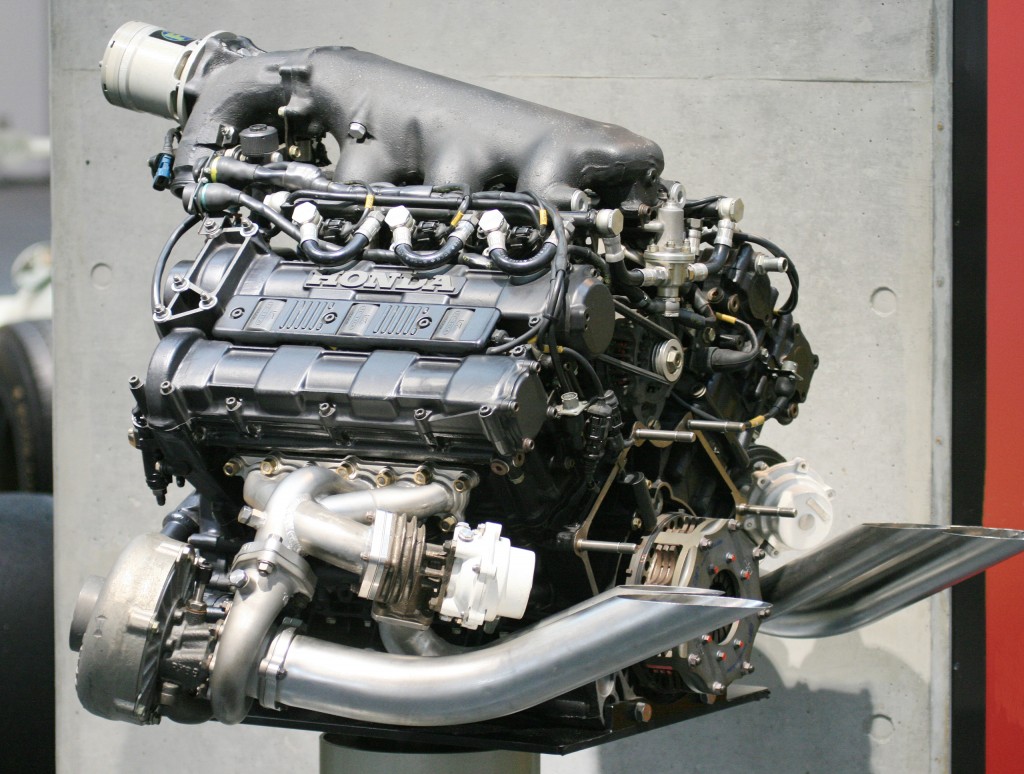 A turbocharged Honda race engine. Can you identify the path of exhaust through the turbo?

1. Gasoline, diesel fuel, kerosene, natural gas. By contrast, rocket engines in space have no air to burn, so they have to bring along oxidizer with the fuel.
2. Actually, very little of the energy consumed by an engine is converted to vehicle motion.
3. Dodge Neon SRT-4 (2003-2005) is an example of a mufferless turbocharged car.