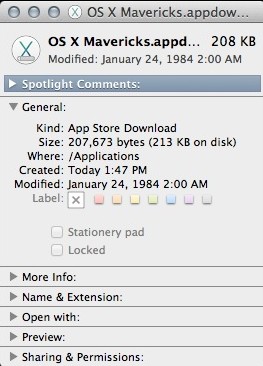 While installing the Mac OS X 10.9 (Mavericks) update, I noticed that the temporary file ( /Applications/Mac OS X Mavericks.appdownload ) created while the update “app” downloads has the creation date set to January 24th, 1984, the day of the initial Macintosh release. I think this file will be removed by the installer when the download completes and the update installs, so it was a good place to hide something most people probably wouldn’t notice.

For the curious, the PHP functions return and format the seconds since UNIX epoch is as follows: