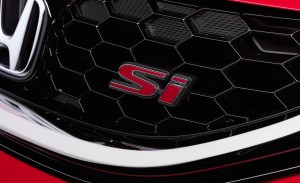 “Si” badge in the front grille of a contemporary Honda Civic.

The “Si” ( originally indicating “Sport injected”) is a trim of the Civic line from Honda. It’s Honda’s designation that the vehicle has upgraded performance characteristics compared to the other trims (LX, DX, EX, etc.). They often had different, more powerful engines installed from the factory, along with stiffer suspension and different tires for improved handling. The Si model followed the same body designs and general engineering as the other Civic models. This article summarizes the Si’s heritage and reviews the changes over the years. 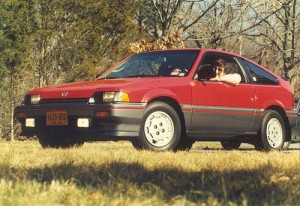 Si was first used as a designation in the United States in 1985 with the Civic CRX Si, which featured a fuel-injected, 1.5 liter engine making 91 horsepower. It went 0-60 mph in 8.5 seconds. 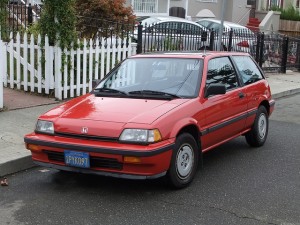 In 1986, the Si trim was extended to the Civic hatchback, offering the same performance of the CRX Si but with four seats. Added improvements over the CRX included a removable glass sunroof, a five-speed manual gearbox, tilt steering wheel, a full-width taillight panel, a color-matched front bumper and a roof spoiler. The engine was the same as in the CRX. 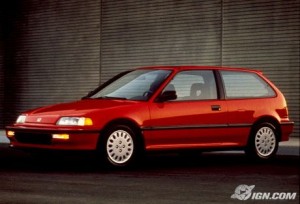 In 1988, Civic was redesigned (bringing it into its fourth generation), and along with it came the Si designation, but not right right away. The Civic Si was absent from the lineup in ’88, with only the CRX offered with the Si surname. The next year, 1989, the Civic Si hatchback was reintroduced, along with a 17-hp upgrade over the 86-87 model. The engine generated 108 horsepower. It weighed 2,286 lb, allowing a 0–60 mph of 8.1 seconds. 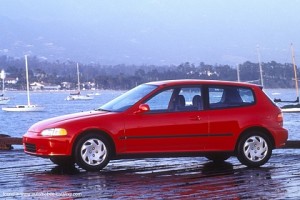 The fourth generation Si, following the 92-95 body style of the Civic hatchback, was not as different from the other Civics as past models were, shipping with the same engine as the EX coupe and sedan. The Si model replaced rear drum brakes with discs, added a power moonroof with tilt, cruise control, and a 125 hp 1.6 liter engine with manual transmission. It propelled the car to 60mph in 7.5 seconds. 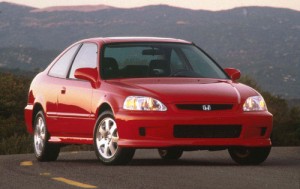 It reappeared as a coupe in 1999, now shipping with a new 1.6 liter engine that made 160 hp. Changes from the standard Civic included stiffer suspension components, which contributed to a flatter-cornering ride. It was available with a five-speed manual transmission only, also including disc brakes on all wheels. Aesthetic exterior changes from the LX/EX models were minimal, with the Si trim featuring a lower-profile and wider 15-inch wheel/tire package, a subtle chin-spoiler, painted side sills, and Si badging. It went 0-60 mph in 7.1 seconds. This Si was only built for 1999 and 2000 model years, after which it was discontinued as the Civic was redesigned yet again.

The next Civic Si appeared a year later, after skipping 2001. The 02-05 Civic Si Civic Si returned to form as a hatchback once again, after having been sold only as a coupé in the previous generation. The body shape of this model was based on the “New Bullet-Form” concept. The interior layout also distinguished itself from other Civic Si generations with its shift lever mounted in the dashboard.

Honda used the 2.0 liter engine from their Acura RSX, rated at 160 horsepower. With a redline of 6,800 rpm, the Si distanced itself from the narrow, high-rpm powerband engine of its predecessor, and as a result saw a 20 percent increase in torque. Performance was relatively underwhelming compared to the competition and the switch to MacPherson struts from double-wishbone suspension resulted in less responsive handling. A near-150 lb increase in weight to 2,744 lb contributed to slower acceleration than the lighter ’99-’00 Si. 60 mph came in 7.6 seconds. 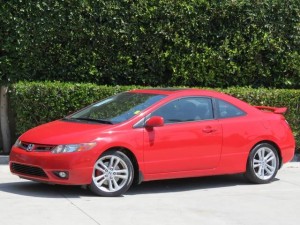 The Si was redesigned for the 2006 model year along with all other Civic trims, bringing about significant changes from the previous generation. The car comes with a 2.0-liter engine that produces 197 hp, while also including a 6-speed manual transmission with a helical limited slip differential. Forty percent stiffer spring and dampening rates from the non-Si trims and stiffer sway bars have bolstered the Civic Si’s handling. Factory 0–60 time of 6.7 seconds. 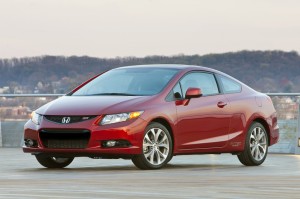 The 9th generation Civic Si upgrades the engine from the 8th generation to a 2.4 liter delivering 201 horsepower. Retained is the 6 speed manual transmission, which is the only available transmission option. The wing spoiler found on the previous generation is replaced by a different design deck-lid spoiler. The interior of the car received slight updates as an addition of rev limit indicator and a power meter, displayed in the new i-MID (intelligent Multi-Information Display). The chassis is more rigid and the curb weight is slightly lower than the previous model. It is the same size as the outgoing model. 0-60mph time on the latest model is 6.4 seconds.